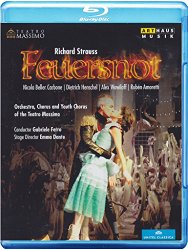 In 2014 the World Orchestra for Peace returned with its conductor Valery Gergiev for its fourth appearance to the BBC Proms to play a special concert, marking the centennial of the outbreak of World War 1. The concert included Roxanna Panufniks Three Paths to Peace, commissioned by the orchestra, Mahlers Sixth Symphony, and it celebrated the 150th anniversary of Richard Strauss with the colourful, fairy-tale soundscapes of his operatic masterpiece Die Frau ohne Schatten. The World Orchestra for Peace, founded in 1995 by Sir Georg Solti to reaffirm, in his words, the unique strength of music as an ambassador for peace is a classical supergroup consisting of leading players from the worlds finest orchestras. Beside the concert, a fascinating documentary with Sir Georg Solti and Valery Gergiev is marking the orchestras 20th anniversary.