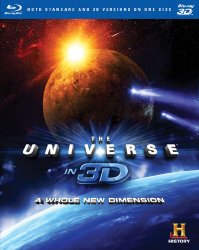 THE UNIVERSET IN 3D: A WHOLE NEW DIMENSION, takes a mind-bending look at Earth and the universe it inhabits. CRASH LANDING ON MARS explores how events might play out if humans were stranded on the red planet. Could astronauts survive dust storms and space radiation or find vital resources like water? WORST DAYS ON PLANET EARTH vividly imagines how our seemingly hospitable planet has been shaped through utter chaos and destruction. Experience in dramatic 3D how giant volcanoes scorched the Earth and darkened skies, and how asteroids the size of Everest slammed into the ocean. In GOD AND THE UNIVERSE, physicists and theologians discuss whether the seemingly miraculous creation of a universe calibrated to support life proves the existence of a creator, or are explained by the laws of physics. Featuring cutting-edge CGI and spectacular NASA footage, this spectacular set from HISTORYr truly takes you where no human has gone before.