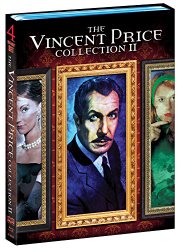 7 Classic films, starring the ultimate horror film star of all time , on Blu-ray for the first time! Handsome slipcase packaging includes newly-designed illustrated art and a 24-page Collector’s book. House on Haunted Hill (1959) : A millionaire offers $10K to 5 people who agree to be locked in a spooky house overnight. The Return of the Fly (1959) : 15 years after the events of The Fly, Andre’s son does some transportation experimentation of his own. The Comedy of Terrors (1963) : An undertaker starts to kill people in order to get new clients. The Raven (1963) : A magician who has been turned into a raven turns to a former sorcerer for help in this film loosely based on the Edgar Allen Poe poem. The Last Man on Earth (1964) : When a disease turns all of humanity into the living dead, the last man on earth becomes a reluctant vampire hunter. Tomb of Ligeia (1964) : A man’s obsession with his dead wife drives a wedge between him and his new bride. Dr. Phibes Rises Again (1972) : The vengeful Doctor rises again, seeking the Scrolls of Life in an attempt to resurrect his deceased wife.

Do you want ot get the The Vincent Price Collection II [Blu-ray]?