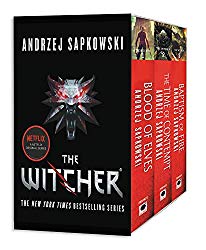 Now a Netflix original series!This special boxed set includes the first three novels in Andrzej Sapkowski's NYT bestselling epic fantasy saga -- the books that introduced the world to The Witcher and inspired the hit video games.For over a century, humans, dwarves, gnomes, and elves have lived together in relative peace. But times have changed, the uneasy peace is over, and now the races are fighting once again. The only good elf, it seems, is a dead elf.Geralt of Rivia, the cunning assassin known as The Witcher, has been waiting for the birth of a prophesied child. This child has the power to change the world - for good, or for evil.As the threat of war hangs over the land and the child is hunted for her extraordinary powers, it will become Geralt's responsibility to protect them all -- and the Witcher never accepts defeat.In Blood of Elves, The Time of Contempt, and Baptism of Fire, Sapkowski brings a fresh new voice to fantasy fiction, creating something wholly dark and exciting in this world of monsters and witchers.

1,000 Places to See in the United States and Canada Before You Die, updated ed.
Albion’s Seed: Four British Folkways in America (America: a cultural history)
Metasploit: The Penetration Tester’s Guide
Big Nate: Say Good-bye to Dork City
Continuous Delivery: Reliable Software Releases through Build, Test, and Deployment Automation (A...
First, Do No Harm: The Dramatic Story of Real Doctors and Patients Making Impossible Choices at a...