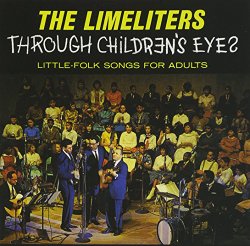 Each of the original Limeliters, surprisingly enough, chose this album as their most satisfying. In the midst of their hectic rise to the top of their profession, the group decided to record a children's album, live (in the best hootenanny tradition), featuring a chorus of 70 elementary school children from Berkeley, CA. The result is what the folk process is all about: children learning songs from the "town troubadours." Any youngster in the early '60s, could sing along with this record and learn such classics as "The Riddle Song," "This Train," "The Lollipop Tree," and singalongs like "Join into the Game" and "B-A Bay." Also included are country music's Carter Family's "Stay on the Sunny Side" and a moving medley of "America the Beautiful" and Woody Guthrie's "This Land is Your Land," sung at a time when the song could still mean something for youngsters. This album is still available on cassette, and copies were sold by the Limeliters during their concert appearances in the '80s and '90s. Alex Hassilev and Lou Gottlieb were amazed by the middle-aged former kid fans who eagerly asked them to autograph their worn-out, tattered LPs. It's still a great album. Get it for your kids. ~ Cary Ginell, All Music Guide

Do you want ot get the Through Children’s Eyes: Little-Folk Songs for Adults?