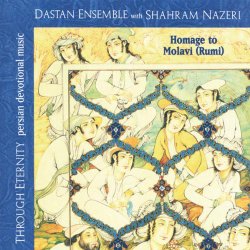 12-century Persian poet Jallalidin Mohammede Balkhi Molavi, a.k.a. Rumi, is probably more famous now than he was during his lifetime due to the proliferation of new music being made in his honor by contemporary poets and musicians. While much Western ambient and pseudospiritual music is made in his name these days, there is still a continuing tradition of respect and creation carried on by Iranian artists, and this CD is a testament to his inspiration. Dastan includes Kayhan Kalhor on setar and kamancheh, Pejman Hadadi on percussion, Hamid Motebassem on setar and tar, and Hossein Behroozi-Nia on barbat. These are all well-respected artists in their own right, which makes Dastan a major ensemble in the Persian music world. But the center of this recording is singer Shahram Nazeri, one of Persian music's great classical singers, whose powerful vocals dominate the music here. Expertly performed and beautifully recorded, Homage rises above the already high standards of these musicians. --Louis Gibson

Do you want ot get the Through Eternity: Homage to Molavi (Rumi)?