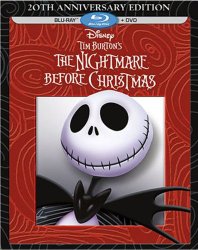 Rattle your bones and jump for joy -- it's the 20th Anniversary Edition of THE NIGHTMARE BEFORE CHRISTMAS on scare-ific, spooktacular Blu-ray Disc(TM)! Bored with the same old scare-and-scream routine, Pumpkin King Jack Skellington longs to spread the joy of Christmas. But his merry mission puts Santa in jeopardy and creates a nightmare for good little boys and girls everywhere! Hear the genius of Danny Elfman's sensational music in 7.1 Surround Sound as the fantastic talents and imaginations of Tim Burton and Henry Selick come to life in stunning Hi-Def. THE NIGHTMARE BEFORE CHRISTMAS -- even more eerie and extraordinary on Blu-ray High Definition!|THE NIGHTMARE BEFORE CHRISTMAS is the first full-length stop-motion animated film ever created.|The movie contains more than 227 animated characters.|Santa Claus' head has more than 50 different working parts, and Jack has more than 400 separate interchangeable heads, each handcrafted with a different facial expression.|The smallest working puppet in the movie is a doll from the "real world" Jack visits that is only one inch long.|Sally is wearing a real miniature dress laid on top of foam latex so that the fabric doesn't move too much on screen.|At the height of production, the animators produced only 70 seconds of finished film per week.|To create Halloweentown's twisted look, the design artists often made their sketches using their nondrawing hand.