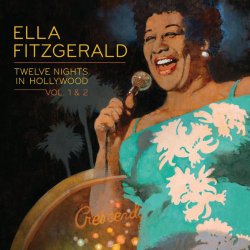 2010 two CD collection. For Twelve Nights In Hollywood, Verve Select dug into the vault to collect the best of her performances across her extended 10-night 1961 engagement at Los Angeles' Crescendo Club - which originally resulted in the hit LP Ella In Hollywood - and her two-night return engagement the following year, presenting an unforgettable experience that puts you right in the front seat at the club, without repeating any performances from the original album. It includes several tracks never before heard by Ella live, tracks she had just recorded or had yet to record in the studio, and old chestnuts she revisited in a fresh way.