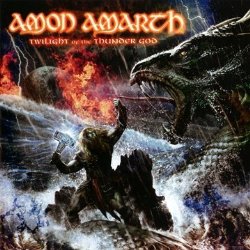 The title of the 2008 album by Amon Amarth is Twilight of the Thunder God. It will feature guest appearances by Lars G”ran Petrov of Entombed, Roope Latvala of Children of Bodom, and the cello metal band Apocalyptica. Along with the release of the album will be an eight-page comic strip based on Norse mythology which will be released by magazines from all over Europe. Amon Amarth will go on a North American headlining tour in October 2008, with support from Ensiferum, Belphegor, and a melodic death metal band from Tampa named The Absence. The band toured the earlier part of 2008 as support for the well known band Slayer throughout Europe in the Unholy alliance Chapter 3.