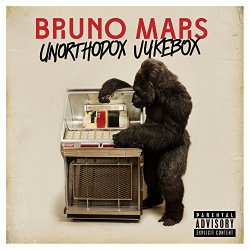 In October 2012, Mars premiered the first single, "Locked Out of Heaven," from his highly-anticipated sophomore album Unorthodox Jukebox. On October 20th, Mars made his comeback to national television when he joined the elite club of hosts and performers for Saturday Night Live alongside the likes of Mick Jagger, Justin Timberlake and Elton John. Mars not only showcased his comedic talent to the millions watching, but also debuted the first live performance of "Locked Out of Heaven" and premiered a brand new song, "Young Girls," from the historic stage in New York City.For Unorthodox Jukebox, Mars and his songwriting/production team The Smeezingtons (Mars, Philip Lawrence, Ari Levine) partnered with heavyweight producers including Jeff Bhasker, Mark Ronson and Diplo to create the 10-track album.

Do you want ot get the Unorthodox Jukebox?