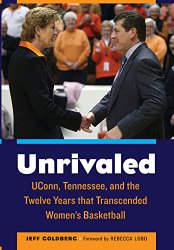 For twelve years the women’s basketball rivalry between UConn and Tennessee was the most iconic matchup in women’s sports. Even now, twenty years since the annual series started, the competition between these two storied programs still provokes heated argument and bitter resentment. Led by Hall of Fame coaches Geno Auriemma and Pat Summitt, UConn and Tennessee combined for nine national championships, with the UConn Huskies winning five—including four against the Tennessee Lady Vols. In all, UConn won thirteen of twenty-two matchups during the rivalry, and along the way the two coaches—with distinctive and brash personalities and a shared determination to rule their sport—clashed privately and publicly, generating enough heat to make women’s basketball relevant in the national sports landscape as never before.On the court, the two teams produced a series of memorable games, from overtime thrillers to timeless classics that defined the sport. Off the court, the coaches’ encounters were often marked by their seemingly genuine dislike for each other, until the conflict reached a breaking point in 2007 and Summitt stunned the basketball world by canceling the series for reasons neither side has ever revealed.Now, eight years after the last game, Unrivaled uncovers the on-court and behind-the-scenes story of this intensely personal rivalry between coaches, players, and the two most passionate fan bases women’s sports has ever known.