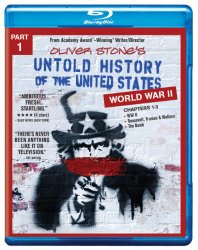 Untold History of the United States Part 1: World War II (BD)CHAPTER 1: WW II - Narrated by Oliver Stone, this new one-hour series features human events that at the time went under reported, but crucially shaped America's unique and complex history. The first chapter explores the birth of the American Empire by focusing on Franklin D. Roosevelt, Winston Churchill and Joseph Stalin. Through examination of key decisions during World War II, discover unsung heroes such as American Henry Wallace and explore the demonization of the Soviets. Directed and narrated by Oliver Stone. CHAPTER 2: Roosevelt, Truman & Wallace - Highlights from the historical upset of Harry Truman replacing Henry Wallace as Roosevelt's Vice President during his fourth term - this dramatic shift in leadership propelled the US towards empire building. Exploration of the relationship between the US and the Soviet Union and the beginnings of the Cold War. The relationships between Roosevelt, Stalin and Churchill are an integral part of post-war Europe's division at the Yalta conference. Directed and narrated by Oliver Stone. CHAPTER 3: The Bomb - The strategies behind the U.S. atomic bombings of Japan are explored as well as the new mythology that emerged from the war. The bombing haunted the Soviets and mistrust towards the Allies grew quickly. The consequences of beginning a process that could end life on the planet are examined. Directed and narrated by Oliver Stone.]]>