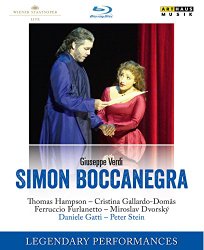 Wiener Staatsoper 2002 - One of the lesser known works by Giuseppe Verdi, Simon Boccanegra is regarded by most opera lovers as one of his finest. The action takes place in the 14th century and deals with the political and personal rivalry between the corsair Simon Boccanegra, who has been elected Doge of Genoa with the help of the plebeian vote, and the local nobleman, Jacopo Fiesco. Arthaus presents a visually alert, musically sensitive and disturbingly coherent (Der Standard) production of the piece on DVD. The staging was directed by one of the giants of the European theatre, Peter Stein. His fondness for atmospherically dense spaces in which the characters can fully develop is particularly well brought out in his Vienna production, not least because he had at his disposal two remarkable singing actors for the principal male roles, Thomas Hampson and Ferruccio Furlanetto. The Vienna State Opera's Simon Boccanegra was a great event in the house's history, and the beauties of this unique work to blossomed under Daniele Gatti's care.