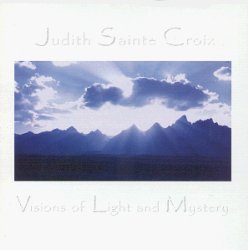 All the music on this CD, in various ways, is inspired or informed by The American Indian, either through their customs, musical structures, spirituality or history. The musical gestures and patterns are derived from the composer's experiences in nature. The music conveys these experiences - which are at once of the outer world and the inner- directly to the listener, through sound. Judith Sainte Croix composer and pianist performs Tukwinong (Cumulus Cloud) Kachina Prelude on the CD. The Kachinas are the nature spirits of the Hopi Indian People. Tukwinong, the Cumulus Cloud Kachina, is a messenger to the towering thunderheads of summer. Hopi prayers are carried through dances. The Hopi People are deeply spiritual and not only teach peace and goodwill but must live it. Many of the dances are supplications for rain. Most also seek to maintain and improve the Hopi People's harmony with nature, thereby enhancing the prospects of members of the Hopi Nation for good health and a long, happy life. Tukwinong is the fourth in a series of Kachina Preludes, written to develop musical images that transform our perception of, and interaction with, nature. The Preludes are dedicated to the celebration of the survival of the Native People of America. The four sections of Tukwinong, which are performed without pause, are: In the Sky on the Wedding Robes, Squash Blossoms, Prayer and the Joyous Rain. The CD also contains two pieces in the composer's "Vision Series." The intent of these pieces is to create a harmonious meeting point for Indian and non-Indian people, symbolized by the combination of the musical instruments from both cultures in the composition. Vision I is for a twelve piece chamber orchestra, conducted by Judith Sainte Croix and features the Native American flute. Following the lead of the flute, the listener experiences a journey through various soundscapes evoked by the orchestral instruments. Andrew Bolotowsky performs flute and Native American flute. Also in the orchestra are Steven Carter, clarinet; Johnny Reinhard, bassoon; Jill Van Nostrand, French horn; Taylor Ho Bynum, trumpet; Bill Hayes, percussion; Lawrence Wolf, piano; Gregor Kitzis, Michael Levin, violins; Christine Ims, viola; Tomas Ulrich, cello; Mark Helias, contrabass. Vision II, commissioned and premiered by HELIOSPHERE, Matt Sullivan, oboe, oboe d'amore, Native American flute and drum; Roxanne Bergman, violin; Sam Kephart, viola; Tomas Ulrich, cello is dedicated to the Cherokee People who walked the Trail of Tears, one of the Indian Removals. To American Indians the word removal is synonymous with holocaust. The Trail of Tears, which occurred in 1838 was, in the words of John Burnett (a soldier assigned to the forced march), "an execution of the most brutal order and...the covetousness on the part of the white race was the cause of all the Cherokees had to suffer." In this terrible American tragedy, in which greed was equally matched with racism, Cherokee People were removed forcibly at bayonet point from their homes in the southeastern United States and sent on a death march for six months in the winter. Half of them died on the way--but half of them made it to their destination in Oklahoma. Demonstrating the tremendous energy, courage and determination of these people to survive, the musicians say (Gah-noh-dah), "I am alive" in Cherokee, at one place in the piece. Depicting Cherokee history poetically, the piece unfolds in three sections. The beginning represents a point before the arrival of the Europeans, then moves into the crisis of contact with Europeans, and finally, in the third section is resolved with the rebirth and renewal of the Cherokee Nation in the West. Excerpts of love letters written between Anton Chekhov and Olga Knipper are the basis for the next selection, an art song called Dear One. This is the only piece on the CD that uses electronic sounds. The song is sung by tenor Tony Alioto. The playwright Rogelio Martinez created the lyrics from source materials found in "Dear Writer, Dear Actress, The Love Letters of Anton Chekhov and Olga Knipper." The first lines are of Anton writing to Olga, lamenting their separation. He was ill, residing in Alta for his health, while she continued her acting career in Moscow. Olga's lines are written to Anton after his death. The rhythmic technique that is used in this piece (a steady pulse of five beats in the electronic accompaniment while the vocal line remains consistently in four) is found in some Native American folk music. Two examples of this are Mata No-otz, as sung by Mowihuiz (Magpie) leader of the mescal religion among the Southern Cheyennes, and Dance Song, sung by Lavender of the Mojave-Apaches. The Bright Leaf Trios feature Lisa Arkis on flute and Daniel Barrett on cello with the composer, Judith Sainte Croix, at the piano. The five movements, Naked, Lyricism of the Lake, Glittering Day, Angelic Mysterium and Flower of Fire are derived from paintings of southwestern landscapes made while Ms. Sainte Croix was at the Wurlitzer Foundation, an artist colony in Taos, New Mexico. Reproductions of the paintings appear in the liner notes.

Do you want ot get the Visions of Light and Mystery?