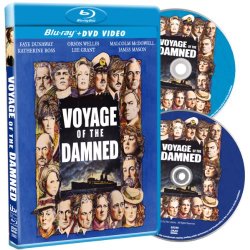 Inspired by the true events of the 1939 voyage of the MS St. Louis, Voyage of the Damned tells the emotional tale of 937 German Jewish refugees seeking haven from the atrocities of their homeland. They soon discover that their escape has been set up as an exercise in Nazi progaganda. Denied their intended sanctuary, will they find a new home, or be forced to return to the horrors awaiting them in Germany?Featuring an all-star cast (including Faye Dunaway, Max Von Sydow, Orson Welles, and Malcolm McDowell) and expert direction by Stuart Rosenberg (Cool Hand Luke), Voyage of the Damned is a powerful and unforgettable film. Nominated for three Academy Awards (Best Supporting Actress, Best Score, and Best Adapted Screenplay.)