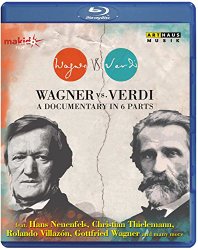 The decision between Wagner and Verdi divides opera lovers into cultural enemies. Giuseppe Verdi, the Southern European, is famous for his anthropocentric work lovely, melodic, tragic and true-to-life. The German Richard Wagner is known and admired for his heroic legends and myths tremendous and expressive. This 6-part documentary series, Wagner vs. Verdi, presents different and very personal perspectives of their work and the impacts of both giants of music theatre using interviews with famous interpreters of both composers and live recordings from the worlds major opera houses such as Bayreuth Festival, Arena di Verona and Gran Teatre del Liceu. The 6 programs: The Revolutionaries (A Film by Pepe Pippig); Verdis World (A Film by Anna Schmidt); The Wagner Religion (A Film by Daniel Gerlach); ... And The Women (A Film by Martin Betz); The Chant (A Film by Thomas Macho); ... And The Effects Of Their Music (A Film by Christian Kugler).