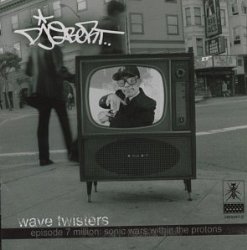 Dubbed the first scratch concept album, Wave Twisters is the first full-length from the man considered to be the world's greatest turntablist -- DJ QBert. As a member of the Northern California DJ collective Invisibl Skratch Piklz, innovation has always been the norm for DJ QBert. Continuing to break new ground, his debut gives further evidence that the most talented record spinners have evolved into complete musicians. Song by song, the record explains a tale of an entire civilization that communicates only through the sounds of scratching. Q-Bert's legendary hand graces 17 tracks, and fellow Piklz Mix Master Mike, Shortkut and other guests come along for a wild ride where nothing is off limits. From standard breaks being sliced and diced to oblivion, to methodically cutting up a female orgasm at the album's metaphorical climax, it never gets boring.