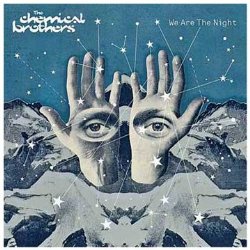 Over a decade has passed since The Chemical Brothers debut that ushered the crossover of electronic music into the rock mainstream. They continue with their musical progression that entices their original fanbase while generating new ones. With over 8 million albums sold, hits like Rock Blockin' Beats, and the ever present music of Galvanize as the music in the Bud Select commercials, The Chemical Brothers have become a ubiquitous presence. With sixth studio album under their belt, Tom Rowlands and Ed Simons demonstrate that when it comes to supreme beat-based innovation, inspired collaborations and sheer sonic excellence, the two are unsurpassable.We Are The Night displays a myriad of sounds, rhythms and emotions along with an astounding roster of featured artists. This griping body of work slipsbetween something simply fun like, The Salmon Dance featuring Fatlip of Pharcyde to haunting tracks like Battle Scars sung by Willy Mason. The album would not be complete without a few signature dance anthems including We Are The Night, Burst Generator and Do It Again which will be the first single for the album. Other additional featured artists that appear on the album include the very hot Klaxons, Midlake and Ali Love.