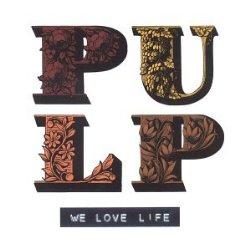 We Love Life­-produced by Scott Walker--is best thought of as the calm after the storm. Pulp's previous album, 1997's This Is Hardcore, was the kind of record often made by intelligent and sensitive people who become famous after a lifetime assuming that being famous was what they wanted. Like Radiohead's The Bends, Elvis Costello's This Year's Model , Nirvana's In Utero, or most of the solo albums of Scott Walker, Hardcore is twitchy, disgusted, nauseous, and distinctly uneasy listening. In contrast, We Love Life is the most musically benign album Pulp have been responsible for, emphasizing a fondness for string arrangements and gently building melodies that have only been intermittently discernible before. There is no blunting of the edge in Jarvis Cocker's voice or words, even if he seems less concerned with himself than previously; indeed, the opening track "Weeds" seems a touching and courageous hymn of admiration to asylum seekers. --Andrew Mueller