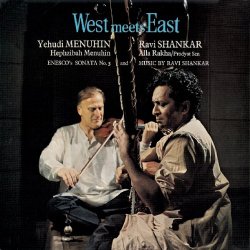 West Meets East: The Historic Shankar/Menuhin Sessions collects the best from Ravi Shankar and Yehudi Menuhin's three West Meets East albums. This compilation features "Prabhati" and "Swara-Kakali" from the first album, "Raga Piloo" and "Dhun" from the second, and "Tenderness" and "Twilight Mood" from the third. All of the tracks feature the hypnotic interplay of Menuhin's violin and Shankar's sitar that made the individual albums critically and commercially popular when they were first released. [Angel originally issued a four-track, LP edition in 1967.] ~ Heather Phares, All Music Guide

Do you want ot get the West Meets East?