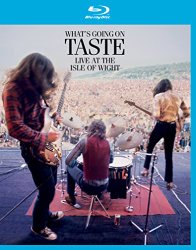 Originally formed in Cork, Ireland in 1966 by Rory Gallagher, Taste had a brief but influential career, releasing two studio albums in 1969 and 1970 and disbanding shortly after their legendary appearance at the 1970 Isle Of Wight Festival, which is the centerpiece of this film. The core of 'What's Going On' is the band's performance at the festival on August 28th but it is encapsulated by a documentary on the history and importance of Taste and setting the scene for their Isle Of Wight Festival appearance. This features contributions from Rory Gallagher's brother Donal along with Brian May (Queen), The Edge (U2), Bob Geldof and renowned guitarist Larry Coryell. Rory Gallagher would go on to enjoy an acclaimed and highly successful solo career and this electrifying show by Taste is an early example of Rory's justified reputation as the ultimate live performer. Bonus Features: Three tracks from the German TV series Beat Club: (1) If The Day Was Any Longer (2) It's Happened Before, It'll Happen Again (3) Morning Sun Three conceptual music videos: (1) I ll Remember (2) What's Going On (3) Born On The Wrong Side Of TimeTRACKLISTING 1) What's Going On 2) Sugar Mama 3) Morning Sun 4) Gambling Blues 5) Sinner Boy 6) Same Old Story 7) Catfish Blues 8) I Feel So Good