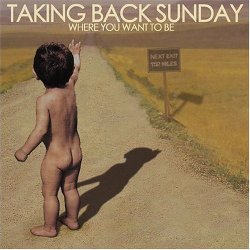 TAKING BACK SUNDAY's musical attributes & determination have inspired one of the most loyal & devoted audiences in rock today. Critical acclaim from the music press was quickly followed by features in Rolling Stone, Spin, Alternative Press & Revolver. The band redefined the rock sub-genre inevitably referred to as "emo," delivering passionate dual vocals & a twin guitar attack that combines the fury of rock with the intensity & urgency of punk. After two long-awaited years, fans can finally breathe. Their upcoming release, Where You Want To Be, is set to take the music world by storm & drop jaws along the way.

Do you want ot get the Where You Want To Be?