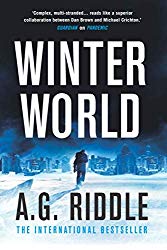 * Longlisted for the 2019 Wilbur Smith Prize for best published novel. *A new ice age... and a shocking discovery... will change humanity forever.In the near future, an ice age pushes humanity to the edge of extinction.Scientists search for the cause--and any hope of stopping the Long Winter. They send probes into the solar system to take readings. Near Mars, one of the probes makes an incredible discovery: a mysterious object, drifting toward the Sun. Is it the cause of the Long Winter? Or could it be our only hope of survival?With time running out, NASA launches a mission to make contact with the artifact. But it isn’t what anyone thought. Humanity faces a new kind of threat--and an event that will reveal a dark truth about our future.From A.G. Riddle, the worldwide bestselling author with OVER 4 MILLION COPIES SOLD, comes a new sci-fi thriller that will forever change the way you look at Earth’s place in the solar system.SELECTED PRAISE FOR A.G. RIDDLE“...reads like a superior collaboration between Dan Brown and Michael Crichton.”-- The Guardian on Pandemic“I finished the book fast because I just couldn’t wait...”-- WIRED GeekDad on Departure“Riddle... keep(s) the focus on his characters... rather than the technological marvels”-- Publisher’s Weekly on Departure“Well-constructed and tightly-wound as a fine Swiss watch--DEPARTURE has non-stop action, an engaging plot and, of course, wheels within wheels.” -- Diana Gabaldon, #1 New York Times bestselling author of Outlander“This is apocalyptic sci-fi at its best.”-- Daily Mail on The Solar WarABOUT THE AUTHORA.G. Riddle’s debut novel, The Atlantis Gene, became a global phenomenon, topping best seller charts in the US and abroad. Every year, Amazon compiles a list of the top 100 bestselling Kindle eBooks of the year (by total sales volume). The Atlantis Gene has made Amazon’s annual Kindle bestseller list an unprecedented five years in a row--every year since the book’s release (2013, 2014, 2015, 2016, and 2017). Since then, Riddle has released eight more novels, selling millions of copies in two dozen languages. His books feature a unique mix of science, history, and suspense that has delighted fans of Michael Crichton, Dan Brown, Clive Cussler, and James Rollins and continues to sell year after year. He lives in Raleigh, North Carolina.NOTE: this novel is available in a variety of formats: as an eBook on Kindle Fire and Kindle eReader, as an Audible audiobook, and in print (paperback and hardcover). It is also enrolled in Kindle Unlimited where subscribers can read for free.

Private Eye Deluxe Edition
Lord John and the Brotherhood of the Blade: A Novel (Lord John Grey)
Theodore Boone Box Set
Fatwa: Hunted in America
Cookie Love: More Than 60 Recipes and Techniques for Turning the Ordinary into the Extraordinary
100 Things Steelers Fans Should Know & Do Before They Die (100 Things…Fans Should Know)