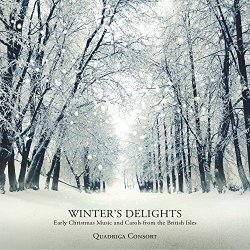 Quadriga Consort's new album 'Winter's Delights' presents Early Christmas Music and Carols from the British Isles, France and Canada, building on the success of the first volume. The album consists of catchy melodies and rhythms played on historical instruments, including early music hits like 'Leanabh an Àigh', 'The First Nowell' and 'O Come, O Come, Emmanuel'. Leanabh an Àigh became world-famous by Cat Stevens as "Morning Has Broken" in 1971 on lyrics by Eleanor Farjeon. This is no ordinary Christmas album, but rather a winter album for all who get tired of conventional Christmas songs.About The Quadriga Consort:The Quadriga Consort are the Early Music Band on an expedition to the origins of pop music: early ballads and tunes from the British Isles, ranging from rollicking dance music to the Celtic-Gaelic and the courtly song traditions. The archaic melodies provide the basis for authentic music of today and tomorrow, so typical for Quadriga with interpretations so fresh, that they make many a pop song of today pale in comparison to the enduringly moving ancient songs of love, yearning, joy and sorrow.

All Through the Night
Eye On It
Some Nights
Beat Generation
J.S. Bach: Sonatas & Partitas for Violin
Between the Devil & The Deep Blue Sea