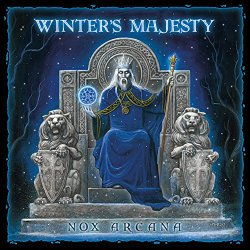 Product Description Return once more to the realm of Ebonshire to celebrate the magic and glory of Winter. In the heart of the Ebonshire forest, the Winter King takes his place upon the crystal throne. With a single breath he transforms the woodlands into an enchanted kingdom of ice and snow. Raising his staff, he summons the four winds and sets them forth to spread his magic throughout the land. And as the earth is covered beneath a blanket of ivory white, the world rejoices in the wondrous realm of winter.        This album features enchanting melodies and heartwarming songs for the holiday season, including an instrumental version of "We Three Kings" and a ghostly rendition of "Scarborough Fair" with original lyrics and musical arrangements by Joseph Vargo and vocals performed by Jeff Endemann. (21 tracks. 68 mins.)        Winter's Majesty concludes the winter-themed trilogy which began with Winter's Knight (2005), followed by Winter's Eve (2009). Joseph Vargo continues to release his haunting holiday music each winter season with Nox Arcana's digital music series entitled Ebonshire.