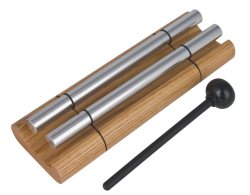 Two rods tuned to similar pitches produce a pulsing tone called "beating." Tibetan monks use small cymbals called tingsha, which are sounded to mark the beginning and end of a period of meditation. You can use your Zenergy Meditation Chime in much the same way. The two rods are purposely tuned to nearly but not quite the same pitch. When both are struck at the same time, an acoustical phenomenon known as "beating" is produced. The rods will seem to ring with the same pitch, but you will notice a distinct pulsation or rhythm in this case, approximately 12 beats per second. Woodstock Chimes are the original, musically-tuned, high-quality windchimes known worldwide for their superior sound. When listening to a Woodstock Chime, you hear a fine musical instrument played by the wind, perfectly hand-tuned using the ancient system of “just intonation” based on natural harmonics. This means the frequencies at which the different tubes vibrate are related to one another by simple whole-number ratios. Tones that are related in this way produce the most beautiful musical intervals. The sonic effect is exceptionally pure and soothing. Over 30 years ago, Grammy award-winning musician and instrument designer Garry Kvistad created the first Woodstock Chime from an aluminum lawn chair he found in a landfill. Fascinated by the Scale of Olympos, a 7th century pentatonic scale that can’t be played on a modern piano, Garry cut and tuned the lawn chair tubes to the exact frequency of the ancient scale. The resulting Chimes of Olympos was the first Woodstock Chime and is still one of our best selling, musically-tuned windchimes. Garry and his wife Diane founded Woodstock Chimes in 1979 and still develop the chimes today. It remains a family-owned business in New York’s Hudson Valley.