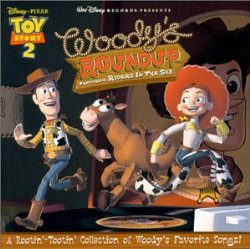 When the makers of Toy Story 2 went looking for a story that Woody could own in the celebrated sequel, they settled on thickening the plot by making Woody the former star of a 1950s-era television variety show. In the wake of the film's success, Disneyland launched an immensely popular variety show spinoff featuring some of the music on Woody's Original Roundup. Subtitled A Rootin'-Tootin' Collection of Woody's Favorite Songs, this imaginary soundtrack to a fictional TV show is spiritedly played by cowboy band Riders in the Sky. The songs are compact ditties that kids will fall in love with--especially the title track, the darling "Jessie, the Yodelin' Cowgirl," and the hit "You've Got a Friend in Me." Without much fanfare, this hoedown has leapt to the front of the pack as one of the year's best children's music releases. --Andrew Bartlett

We Shall Overcome: The Seeger Sessions (American Land Edition) (CD/DVD)
Me Myself & I
Miss Julie
Christmas: What’s It Gonna Be Santa
Jason Isbell and the 400 Unit
Hot Fuss