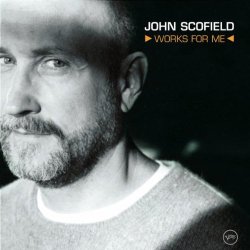 In his CD Works For Me, guitarist John Scofield returns to the jazz heartland, focusing on straight-ahead, four-to-the-bar swing in the company of Kenny Garrett, Brad Mehldau, Christian McBride and Billy Higgins--all masters of their respective trades. Scofield, one of the most distinctive and influential jazz guitarists since John McLaughlin, has always had a penchant for word-play titles (most of them in fact devised by his wife) and "Works For Me" is very probably a coded reference to the fact that in this album he favours the music closest to his heart. It's not all heads-down bebop though: there are chastened ballads and episodes of the funk vamping which has become Scofield's latterday signature; however, on this occasion even potentially banal riffing is spiced with harmonic surprise and enlivened by Sco's distinguished rhythm section. Scofield the instrumentalist also seems to enjoy a renascence, stepping up to creative levels he hasn't always reached in recent years. Such early triumphs as Rough House, Who's Who and Still Warm are run close, if not entirely recaptured. --Mark Gilbert