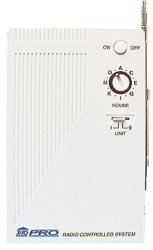 This multiple device RF base works with X10's line of IR/RF remote controls and PIR motion sensors. The newly redesigned RF base module works as an X10 signal converter as it receives all 16 unit code addresses wireless on one house code. Wireless X10 devices need this base unit to catch the radio signals and convert them to X10 signals on the electricity line. Another new feature of this RF signal converter over the older version is that this unit will "look" for X10 signal activity before transmitting. If the unit detects X10 activity on the line, it holds off transmitting the command until the line is clear. Another element to this X10 signal converter not found in other RF units is a unique feature where an X10 transmitter can do a "request status" of the built-in appliance module. Since the unit is a receiver and transmitter of X10 signals, it can respond with "Yes, I'm on!" Add as many handheld remotes and X10 wireless devices as you want to each base. As long as the transmitters are on the same house code as the base, they will all control the same devices. Be careful to have only one RF base unit or X10 security console (which also change RF signals into X10 signals for the electricity line) per housecode. If more than one base unit is used on the same housecode, X10 signal collisions may result.