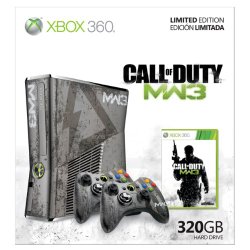 Designed by Xbox, Infinity Ward and Sledgehammer Games, the Xbox 360 Limited Edition Call of Duty: Modern Warfare 3 Console celebrates the most intense Xbox 360 franchise of all time, while preparing players for the most epic “Call of Duty” experience yet. This must-have console for “Call of Duty” fans worldwide includes a customized console with graphics from the adrenaline-fueled game, along with two custom wireless controllers, a 320GB hard drive and a copy of “Call of Duty: Modern Warfare 3”. Included in the bundle are downloadable exclusive avatar items and a one month Gold subscription to Xbox LIVE. The two exclusive wireless controllers have been crafted to match the console design and include a transforming D-pad, which can be rotated to adapt to each user’s game play. To further immerse the biggest fans in the gaming experience, this limited edition console brings “Call of Duty: Modern Warfare 3” to life from the first time you turn it on, offering the unmistakable sound of night vision goggles powering on will be immediately recognizable to any fan. Hard Drive Space At 320GB, the console has the largest hard drive currently available for any Xbox 360, allowing gamers and media enthusiasts alike plenty of space to store game add-ons, downloadable content, music, photos, videos and movies.