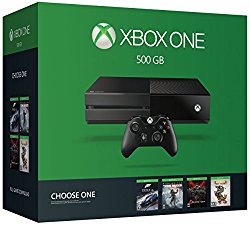 Choose one of four blockbuster titles with the Xbox One 500GB Name Your Game Bundle, featuring a full game download of either Forza Motorsport 6, Rise of the Tomb Raider, Gears of War: Ultimate Edition, or Rare Replay - the choice is yours. Join friends on Xbox Live, the world’s premier gaming community across Xbox One and Windows 10. Play your digital and disc-based Xbox 360 games with advanced features like Game DVR. And stream your Xbox One games to any Windows 10 PC in your home. With the greatest games lineup in Xbox history, there’s never been a better time to jump ahead with Xbox One.