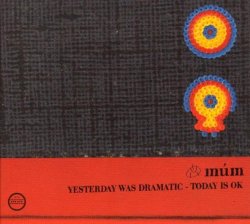 Classic debut Mum album, previously issued by Tugboat & Thule -- available again. "Yesterday Was Dramatic - Today is OK was mostly recorded in a tiny, sweaty room in the summer of 1999 with carpenters banging nails around us, but sometimes we put on headphones so we couldn't hear them. It was originally released on an Icelandic label called Thule, but early on a number of disputes came up, which ended up dragging on for many years. Part of the attraction of the album is its mixture of analogue instruments such as harmonica, accordion and glockenspiel with digital clicks and cuts. But what makes it so beautiful is that at no point this combination feels constructed or forced. While listening to Yesterday Was Dramatic - Today is OK you don't care how it was made you're just enjoying that it exists."

Do you want ot get the Yesterday Was Dramatic: Today Is Ok?