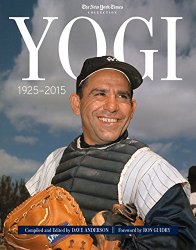 Yogi Berra, the Yankees' beloved No. 8, passed away on September 22 at the age of 90. A Hall of Fame catcher who was not only one of baseball's great players—winner of three Most Valuable Player awards and numerous World Series rings—but also one its most colorful and appealing characters, well-known for his everyman demeanor and occasional adventures into syntax. A mainstay on the great Yankees teams of the 1940s, '50s, and '60s, Berra was an 18-time All-Star and the American League MVP in 1951, 1954, and 1955. He finished with 358 home runs and 1,430 RBIs, earning induction into the Baseball Hall of Fame in 1972. After retiring as a player, Berra managed both the Mets and Yankees and led the 1973 Mets to the National League pennant. This commemorative tribute features stories and photographs from the New York Times' archives, with an eloquent foreword by Ron Guidry, one of Berra's closest friends. Compiled and edited by longtime New York sportswriter Dave Anderson, this collection celebrates the life of an American original. Whether re-living Berra's clutch home runs or telling the story behind "It ain't over 'til it's over," this book is an extraordinary tribute to a player everyone loved

The Total Deer Hunter Manual (Field & Stream): 301 Hunting Skills You Should Know
The Women’s Small Business Start-Up Kit: A Step-by-Step Legal Guide
Microsoft® Office 2013: In Practice (Simnet Code not included)
Resilience: Hard-Won Wisdom for Living a Better Life
Boy
Don’t Pee on My Sofa! And Other Things to Laugh About