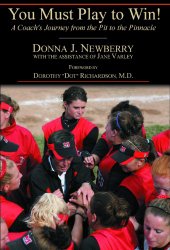 Sport is one of the great institutions of civilization, and the rise of women s sport during the past half century has been one of the most dramatic and visible recent a personal reflection on the coaching career of Donna J. Newberry, coach, teacher, and administrator in the Athletics Department of Muskingum University, New Concord, Ohio, whose passionate commitment to both excellence and gender equality in sport helped to make possible and epitomizes the significant expansion of women s collegiate athletics in the United States since the 1970s. Fresh out of graduate school, twenty-two-year-old Donna Newberry accepted a teaching and coaching position at Muskingum in 1974. Once on board, her eyes opened quickly to the limitations she faced inadequate institutional funding, overwhelming teaching and coaching responsibilities, poor facilities for women s athletics, and a legendary men s sports program that controlled the entire athletics budget. From the outset, Newberry set about to create an equitable environment within which to develop a quality women s athletics program. In 1978, she took the lead responsibility at her institution to effect the full implementation of Title IX provisions that guaranteed equal opportunity, in sport and elsewhere, for both men and women. Following a tragic traffic accident in 1989 that claimed the lives and ended the careers of several of her athletes, she led efforts to assure the safer transportation of teams attending off-campus matches. Throughout, she insisted that her athletes were, first and foremost, also students and that they were attending college to receive an education, to nurture their social and spiritual lives, and to prepare themselves for a lifetime of personal responsibility and citizenship. Applying her coaching and teaching responsibilities to herself, Newberry spent her summers in pursuit of what she termed experiential learning inserting herself into unfamiliar physical, cultural, or social environments, often pushing herself to the edge, as she explored new ways of learning about and understanding the world as well as to remind herself of the commitment and sacrifices she was expecting from her athletes. As the years passed, the long-term consequences of Newberry s passion, commitment, perseverance, and high standards unfolded. She remained at Muskingum, the women s athletics program and facilities expanded dramatically, women s teams were admitted to the Ohio Athletic Conference and the NCAA, and the sports programs at Muskingum which Donna coached for decades women s basketball and softball assumed legendary stature of state, regional, and national significance. Newberry s teams made numerous post-season appearances in NCAA tournaments, including eleven at national Division III collegiate finals, and won the National Championship in softball in 2001. She was named the WNBC/Converse Coach of the Year in women s basketball in 1991 and the Muskingum softball coaching staff was named the NFCA Coaching Staff of the Year in 2001. Nineteen of Newberry s players were named All-Americans, and in 2008, Newberry was inducted into the National Fastpitch Coaches Association Hall of Fame. Another facet of Newberry s life is that, by early in 2009, she was a two-time survivor of breast cancer, but a recurrence of the disease later that year led to her death in November, 2010. She dedicated the last few months of her life to writing this book in the hopes that her own perspectives on coaching might be made available, and be of value, to younger coaches, to those who might want to go into coaching, and to those interested in the transformation of women s athletics since the early 1970s. Those perspectives are presented here, in her own words, the way she wanted them to be passed on.

And Still I Rise
Kaplan TOEFL Vocabulary Prep
Architectural Graphics
Phineas Gage: A Gruesome but True Story About Brain Science
The Book of Kells: An Illustrated Introduction to the Manuscript in Trinity College, Dublin (Seco...
Stretching for 50+: A Customized Program for Increasing Flexibility, Avoiding Injury, and Enjoyin...