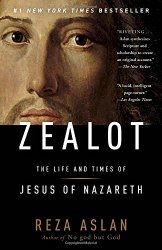 #1 NEW YORK TIMES BESTSELLERNAMED ONE OF THE BEST BOOKS OF THE YEAR BY Good Housekeeping • Booklist • Publishers Weekly • BookishFrom the internationally bestselling author of No god but God comes a fascinating, provocative, and meticulously researched biography that challenges long-held assumptions about the man we know as Jesus of Nazareth.   Two thousand years ago, an itinerant Jewish preacher and miracle worker walked across the Galilee, gathering followers to establish what he called the “Kingdom of God.” The revolutionary movement he launched was so threatening to the established order that he was captured, tortured, and executed as a state criminal.   Within decades after his shameful death, his followers would call him God.   Sifting through centuries of mythmaking, Reza Aslan sheds new light on one of history’s most influential and enigmatic characters by examining Jesus through the lens of the tumultuous era in which he lived: first-century Palestine, an age awash in apocalyptic fervor. Scores of Jewish prophets, preachers, and would-be messiahs wandered through the Holy Land, bearing messages from God. This was the age of zealotry—a fervent nationalism that made resistance to the Roman occupation a sacred duty incumbent on all Jews. And few figures better exemplified this principle than the charismatic Galilean who defied both the imperial authorities and their allies in the Jewish religious hierarchy.   Balancing the Jesus of the Gospels against the historical sources, Aslan describes a man full of conviction and passion, yet rife with contradiction; a man of peace who exhorted his followers to arm themselves with swords; an exorcist and faith healer who urged his disciples to keep his identity a secret; and ultimately the seditious “King of the Jews” whose promise of liberation from Rome went unfulfilled in his brief lifetime. Aslan explores the reasons why the early Christian church preferred to promulgate an image of Jesus as a peaceful spiritual teacher rather than a politically conscious revolutionary. And he grapples with the riddle of how Jesus understood himself, the mystery that is at the heart of all subsequent claims about his divinity.   Zealot yields a fresh perspective on one of the greatest stories ever told even as it affirms the radical and transformative nature of Jesus of Nazareth’s life and mission. The result is a thought-provoking, elegantly written biography with the pulse of a fast-paced novel: a singularly brilliant portrait of a man, a time, and the birth of a religion.Praise for Zealot  “Riveting . . . Aslan synthesizes Scripture and scholarship to create an original account.”—The New Yorker“A lucid, intelligent page-turner.”—Los Angeles Times  “Fascinatingly and convincingly drawn . . . Aslan may come as close as one can to respecting those who revere Jesus as the peace-loving, turn-the-other-cheek, true son of God depicted in modern Christianity, even as he knocks down that image.”—The Seattle Times   “[Aslan’s] literary talent is as essential to the effect of Zealot as are his scholarly and journalistic chops. . . . A vivid, persuasive portrait.”—Salon   “This tough-minded, deeply political book does full justice to the real Jesus, and honors him in the process.”—San Francisco ChronicleFrom the Hardcover edition.

Everything, Everything
A Baby for Christmas (Christmas in Eden Valley)
Raspberry Pi Projects for the Evil Genius
Prenups for Lovers: A Romantic Guide to Prenuptial Agreements
Quilter’s Daughter (DAUGHTERS OF LANCASTER COUNTY)
Tennessee Williams: Mad Pilgrimage of the Flesh