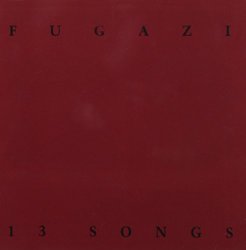 Disregarding all the wordiness and adjectives that can be heaped like a pile of horse dung at Disneyland upon great, timeless albums, the importance of this record can perhaps be more suitably measured by the number of people who remember the first time they heard it. 13 Songs (a combination of the Fugazi and Margin Walker EPs) is usually among the first records that spring to mind when defining alternative rock. Furious, intelligent, artful, and entirely musical, it's a baker's dozen of cannon shots to the gut -- not just a batch of emotionally visceral and defiant songs recorded by angry young men, but something greater. Nearly every song here reaches an anthemic level without falling prey to pomposity. Most of these songs are anthems of the self rather than a rallying cry of accusation or unification, with "Waiting Room" and "Suggestion" serving as two examples. The attention-getting drop into silence that occurs at the 22-second mark of the former is instantly memorable. The relentless ska/reggae-inflected drive of the song is equally effective, as Ian MacKaye tells everyone listening to get off their behinds and do what they want. During the Meters-meets-Ruts thrust of "Suggestion," MacKaye switches genders for an entirely convincing rant on the objectification of women. Guy Picciotto takes on the persona of an addict on "Glue Man," whose blurred sense of reality is also conveyed in the warped, psychedelic guitars. Picciotto threatens to set himself on fire during "Margin Walker"; given the spirited play of the remaining members, it sounds like the same could be said for the rest of them. Foreshadowing the band's knack for introspective and mid-tempo concluding tracks, the disc ends with MacKaye's "Promises," examining the pitfalls of trust in relationships of any nature. A landmark record. ~ Andy Kellman, All Music Guide