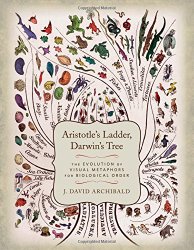 Leading paleontologist J. David Archibald explores the rich history of visual metaphors for biological order from ancient times to the present and their influence on humans' perception of their place in nature, offering uncommon insight into how we went from standing on the top rung of the biological ladder to embodying just one tiny twig on the tree of life. He begins with the ancient but still misguided use of ladders to show biological order, moving then to the use of trees to represent seasonal life cycles and genealogies by the Romans. The early Christian Church then appropriated trees to represent biblical genealogies. The late eighteenth century saw the tree reclaimed to visualize relationships in the natural world, sometimes with a creationist view, but in other instances suggesting evolution. Charles Darwin's On the Origin of Species (1859) exorcised the exclusively creationist view of the "tree of life," and his ideas sparked an explosion of trees, mostly by younger acolytes in Europe. Although Darwin's influence waned in the early twentieth century, by midcentury his ideas held sway once again in time for another and even greater explosion of tree building, generated by the development of new theories on how to assemble trees, the birth of powerful computing, and the emergence of molecular technology. Throughout Archibald's far-reaching study, and with the use of many figures, the evolution of "tree of life" iconography becomes entwined with our changing perception of the world and ourselves.

Do you want ot get the Aristotle’s Ladder, Darwin’s Tree: The Evolution of Visual Metaphors for Biological Order?