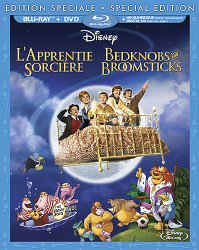 Let the enchantment begin! Disney's Academy Award(R)-winning classic, BEDKNOBS AND BROOMSTICKS (Best Visual Effects, 1971), soars onto Blu-ray and Digital HD with an all-new digital master. Experience a dazzling blend of live action and wondrous animation from the producer, director and writer of MARY POPPINS, sure to delight the entire family. Disney legends Angela Lansbury (BEAUTY AND THE BEAST) and David Tomlinson (MARY POPPINS) star in this beloved film about an apprentice witch who reluctantly takes in three orphan children. Though her first spells create more laughs than magic, Miss Price and the children soon find themselves swept away aboard a fantastic flying bed -- their ticket to fun-filled excitement and adventure. Take the ride of your life with BEDKNOBS AND BROOMSTICKS.|The film was made entirely on the Disney Studio lot in Burbank, California, where outdoor sets included the town of Pepperinge Eye and Miss Price's seaview cottage, and indoor sets included a three-block section of London's legendary Portobello Road.|Two hundred players jammed this set alone, which was filled with bric-a-brac and such oddments as a Sicilian sedan chair, Limoges china, and gas masks from World War II.|The ghostly medieval army's weapons and armor had originally been assembled in Spain for the film EL CID, and then were shipped to America to be used in the Warner Bros. musical CAMELOT