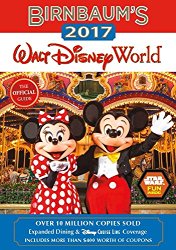 As Walt Disney World continues to grow and evolve, trust Birnbaum to guide you through it all.-- Disney's Animal Kingdom is completing its 14-acre growth spurt-the largest expansion in Walt Disney World theme park history. Turn to Birnbaum for details on all the latest additions to this park's immersive celebration of nature. Among them: • Pandora-The World of AVATAR, set to open in 2017, invites guests to a land themed to the blockbuster film AVATAR. The 2017 edition of Birnbaum's Official Guide to Walt Disney World explores this escapist realm that includes a glowing forest, floating mountains, flying Banshees, and a bona fide "E-Ticket" attraction: AVATAR Flight of Passage. • Sunset Safaris: A new nighttime adventure takes over the popular Kilimanjaro Safaris attraction. Birnbaum offers insight on how to make the most of an evening visit to Animal Kingdom and experience the magically extended orange glow of the setting sun. • Animal Kingdom now offers its own version of a Disney park "kiss good night" with the brand-new after-dark extravaganza known as Rivers of Light. Birnbaum sheds light on this combination of live performances, water screens, swirling animal images, and floating lanterns-taking place on and around the Discovery River. -- The Force continues to gain strength at Walt Disney World. In addition to a sneak-peek at Star Wars Land, currently under construction at Disney's Hollywood-themed park, Birnbaum gives the low-down on all the current fun, courtesy of Darth Vader and company. • Fireworks have blasted back into the Disney's Hollywood Studios, and Birnbaum explains where and when to view the seasonally presented Star Wars-themed pyrotechnic display. • Do your youngsters fancy themselves proud Padawans? We can direct them to the all-new Jedi Training Company, where they can learn to harness the Force, wield a light saber, and fight the Dark Side.-- What's it like to be a toy in Andy's backyard? WDW guests will find out soon - Toy Story Land is on its way! Birnbaum offers a first look at what to expect when this new 11-acre play land is complete.-- Put on your dancing shoes - Club Disney is a lively new dance party where the "walls come alive with classic Disney animation." We'll tell you where to find it!-- Get the scoop on new and newly-enhanced theme park shows and attractions, including Epcot's beloved Soarin', recently re-imagined and now known as Soarin' Around the World, plus Frozen Ever After, the wildly popular new family-friendly dark ride that transports guests to Elsa's Ice Palace and other Arendelle must-sees. -- Speaking of Anna and Elsa, we'll tell you the best way to meet them and even belt out "Let It Go" and other Frozen favorites with the revered royal duo.-- Disney Cruise Line weighs anchor a mere 50 miles from Walt Disney World, making a surf-and-turf vacation a tempting possibility for many a Disney guest. A special Birnbaum "bonus" chapter guides guests from possibility to reality, laying out all the details for pairing a Disney Cruise with a visit to Walt Disney World.