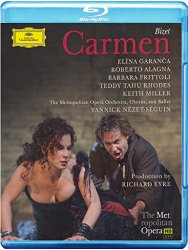 When the DVD version was released in 2010 it was the top selling Deutsche Grammophon DVD for months. It has shipped more than 37.000 units to date.As well as triumphant successes as Carmen in London, Vienna and Munich, El na Garan a, the Carmen of our day (News, Austria), took New York s Metropolitan Opera by storm in this Met Live in HD performance, transmitted to cinemas around the world and now available for the first time on BluRay.Every generation has its must see Carmen. The list of definitive gypsy seductresses is now enriched by the Carmen of our time - El na Garan a.Starring alongside her is star tenor Roberto Alagna as Don José, Barbara Frittoli as his first love Micaëla and New Zealand baritone Teddy Tahu Rhodes as the toreador Escamillo. The Metropolitan Opera Orchestra is conducted by rising star Canadian maestro Yannick Nézet-Séguin.The Wiener Zeitung said it all when it observed of Garan a s Carmen that the role and the singer are perfectly matched .Extra material: Backstage at the Met with host Renée Fleming: Interviews with El na Garan a and Roberto Alagna as well as with Yannick Nézet-Séguin, Barbara Frittoli, Teddy Tahu Rhodes and Christopher Wheeldon