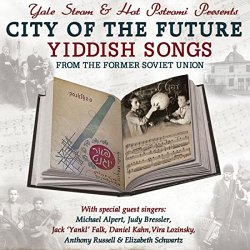 Yale Strom, the multiply gifted American violinist, composer, filmmaker, writer, educator, photographer and playwright is among other things, considered a pioneer among klezmer revivalists with his comprehensive field research in Central and Eastern Europe and the Balkans regions within the Jewish and Rom communities. City of the Future explores the Jewish songs composed by Shmuel Polonski in 1931, a golden time of great vitality Yiddish culture within the former Soviet Union. Recorded for the first time, these pre-WWII songs are a vital historic and creative portrait of a moment in time, strongly performed by Strom with his klezmer ensemble Hot Pstromi and a roster of guest singers including Michael Alpert of Brave Old World and Judy Bressler of the Klezmer Conservatory Crew among man others.

Do you want ot get the City of the Future – Yiddish Songs from the Former Soviet Union?