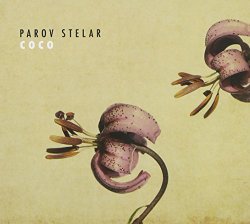 With his unmistakable sound-mix of Jazz- and Swing samples and electronic music, Parov Stelar has secured his own unique position in the world of music. His upcoming fourth album Coco is eagerly awaited. The double CD starts off where his successful LP s Rough Cuts , Seven And Storm and Shine ended. On the other hand he is consequently developing his established jazzy sound, by adding new stylistic elements to his tunes. Also his dancefloor-productions, that up to now have only been published as singles, find a debut to a greater extent on his album. They meet with Stelar s melancholic-melodious trademark-sound, which is well known from his earlier albums, but now is also spiced up with Hip-Hop beats and synth-pads. Parov Stelar manages to build bridges between his own worlds of sound with these extensive LP as well he as he does with listening- and dance-music in general. An electrifying album to fall for.The two CDs are originally thought of as one with tracks that can be danced to and one with tracks just for listening. Nevertheless the line between those two approaches becomes blurred in Parov Stelar s newest compositions. The album makes your feet tap more and more with every track. The musician himself sees the whole thing as a book for musical readers which is classically defined in introduction, middle part and end. Because of downloading hit numbers on downloading platforms the listening in to albums and thereby reflecting on less prominent tracks, is lost. Parov Stelar sets Coco as a statement against this habit. Apart from two cooperation-tracks with the saxophone-player from his live-band, Max The Sax, Stelar has cooperated with six singers from different genres. This again gives Coco a characteristic, one and only feeling.

The Very Best of Elvis Costello
I Will Always Love You: The Best Of Whitney Houston
Live Aid (4 Disc Set)
FabricLive 25 – High Contrast
In Through The Out Door (Deluxe Edition)(2LP 180 Gram Vinyl)
Go the Very Best of Moby