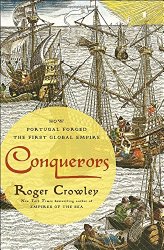 In Empires of the Sea and City of Fortune, New York Times bestselling author Roger Crowley established himself as our generation’s preeminent historian of the great European seafaring empires, and the go-to author for post-Crusade clashes of East and West. Now, in Conquerors, Crowley gives us the epic story of the emergence of Portugal, a small, poor nation that enjoyed a century of maritime supremacy thanks to the daring and navigational skill of its explorers—a tactical advantage no other country could match. Portugal’s discovery of a sea route to India, campaign of imperial conquest over Muslim rulers, and domination of the spice trade would forever disrupt the Mediterranean and build the first global economy.   Crowley relies on letters and eyewitness testimony to tell the story of tiny Portugal’s rapid and breathtaking rise to power. Conquerors reveals the Império Português in all of its splendor and ferocity, bringing to life the personalities of the enterprising and fanatical house of Aviz. Figures such as King Manuel “the Fortunate,” João II “the Perfect Prince,” marauding governor Afonso de Albuquerque, and explorer Vasco da Gama juggled their private ambitions and the public aims of the empire, often suffering astonishing losses in pursuit of a global fortune. Also central to the story of Portugal’s ascent was its drive to eradicate Islamic culture and establish a Christian empire in the Indian Ocean. Portuguese explorers pushed deep into the African continent in search of the mythical Christian king Prester John, and they ruthlessly besieged Indian port cities in their attempts to monopolize trade.   The discovery of a route to India around the horn of Africa was not only a brilliant breakthrough in navigation but heralded a complete upset of the world order. For the next century, no European empire was more ambitious, no rulers more rapacious than the kings of Portugal. In the process they created the first long-range maritime empire and set in motion the forces of globalization that now shape our world. At Crowley’s hand, the complete story of the Portuguese empire and the human cost of its ambition can finally be told.   Praise for Roger Crowley’s Empires of the Sea   “Crowley has an astonishing gift for narration; his account is as exciting as any thriller.”—The Wall Street Journal   “Crowley’s page-turner history . . . deserves to be this [season’s] most recommended nonfiction book. . . . Rich in character, action, surprise, what transpired in those few desperate weeks is one of history’s best and most thrilling stories.”—The Dallas Morning News   “[Crowley] offers exquisitely delicate insights and undulating descriptive passages. Yet in his descriptions of the battles, his prose is so taut and tense, it is impossible not to be caught up in the harrowing action.”—The Christian Science Monitor   City of Fortune   “[Crowley] writes with a racy briskness that lifts sea battles and sieges off the page.”—The New York Times   “The rise and fall of Venice’s empire is an irresistible story, and Crowley, with his rousing descriptive gifts and scholarly attention to detail, is its perfect chronicler.”— Financial Times   “A pleasure to read . . . a gripping story.”—Washington Independent Review of Books

Do you want ot get the Conquerors: How Portugal Forged the First Global Empire?