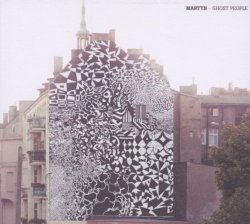 ''My last album, 'Great Lengths,' was very personal. A lot of the music and the themes behind it were taken out of my daily life: my sorrows and my melancholy. For this album, I chose things that are further away from me: the 'Ghost People' theme. There are references to DJing in general. Not the jet-set DJ life, but the old Paradise Garage DJ life, where people want to share and play the music they really love, regardless of if it's trendy. Nothing fancy or flashy. Just back to the roots.''It's only natural that Martyn has risen above the cliches and pitfalls of the vacuous DJ world. Over his 15 years DJing, 6 years producing, and 4 years A&R'ing his 3024 imprint, the Holland-born/Washington DC-based artist has forged his own path every step of the way. His multi-leveled career has kept balance with a focus on art, and his every sacrifice is preserved in an endless dedication to music. As a continual record buyer and beat seeker, Martyn is a beacon of hope through leagues of passion-less DJs and producers, the 'ghost people': plastic, hollow shells that focus only on the in-the-now grooves or keeping in line with trends.Martyn's inspiration stems from the old school mentality of connecting the dots, much like how Ron Hardy would tweak a soul track into a house groove, or Goldie sent processed breakbeats far into the future. Throughout his uncategorisable sound, Martyn gives nods to the electronic music that came before him: bringing back the energy of early rave, the deep builds of old jungle, the immersive and impulsive feel of an early Francois K DJ set. A veritable ambassador for scenes across the board, and across oceans, Martyn has a rare ability to bring sounds together, and unite the right people all the while.One artist he's united with time and time again is Brainfeeder leader Flying Lotus. A close friend within whom he's always found creative alliance, the two decided to join forces on Martyn's sophomore album this September. With Ghost People, Martyn pulls Brainfeeder out of LA and straight into the fluorescent bounce of West London's 2-step, massaging the darker edge of Croydon's dub roots, and D&B's otherworldly and sci-fi sonics, while simultaneously moving through the grit of Detroit's mechanic grooves, and into the freewheeling vibe of Berghain. Yet, all the while, he maintains Brainfeeder's spirit of wild experimentalism and - as the title of his 'We Are You In The Future' suggests - sense of futurism at the forefront, with each of the album's unpredictable tracks.To bring the album to life, Martyn is teaming up with his 3024 partner, visual artist and muralist (''the artist formally known as street artist''), Erosie. The two will be planning a series of special launch parties in various parts of the world.

Do you want ot get the Ghost People?