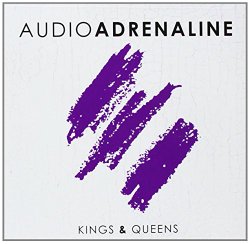 After five years away, Audio Adrenaline is back -- by popular demand and with a renewed mission. The faces may look a little different, but the heart and passion of this GRAMMY-winning band remains unchanged. Yes,that's Kevin Max of dcTalk and solo fame at the mic and founding member Will McGinniss on bass. The new lineup is rounded out by CCM vets Dave Ghazarian (Superchick), Jared Byers (Bleach), and singer-songwriter Jason Walker. Former front man and co-founder Mark Stuart remains very involved and contributed to many of the songs for the new album.This talented group of like-minded musicians shares a common goal: to bethe voice for orphans in Haiti and around the world. Lead single, Kings &Queens," is an orphan anthem that celebrates the transformation God canbring about. The album's remaining fresh rock tracks are just as powerful.The new Audio Adrenaline is creating music that will move you while makingthe world a better place for children in need. Thanks to the band, KnowHope and AA's label, Fair Trade Services, a portion of proceeds will directly benefit the work of Hands & Feet Project.