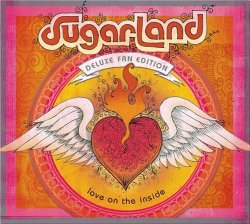 Deluxe Fan edition of Sugarland's 2008 album, Love On The Inside. The first single, 'All I Want To Do' debuted on the nationally televised ACM Awards Show it has reached the Top 20 on the radio charts. Sugarland tours this album throughout 2008. Deluxe Fan Edition Features 5 bonus songs, expanded CD booklet and access to exclusive online video downloads, plus the 'Platinum Ticket' Instant Win Game to award the Ultimate Sugarland Fan Experience. Sugarland is the reining CMA Vocal Duo of The Year and they have received a host of other awards.

Do you want ot get the Love On The Inside [Deluxe Fan Edition]?