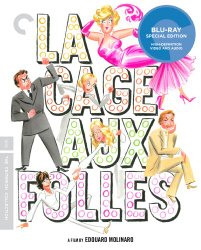 Renato (La grande bouffe’s Ugo Tognazzi) and Albin (Diabolique’s Michel Serrault)—a middle-aged gay couple who are the manager and star performer at a glitzy drag club in St. Tropez—agree to hide their sexual identities, along with their flamboyant personalities and home decor, when the ultraconservative parents of Renato’s son’s fiancée come for a visit. This elegant comic scenario kicks off a wild and warmhearted farce about the importance of nonconformity and the beauty of being true to oneself. A modest French comedy that became a breakout art-house smash in America, Edouard Molinaro’s La Cage aux Folles inspired a major Broadway musical and the blockbuster remake The Birdcage. But with its hilarious performances and ahead-of-its-time social message, there’s nothing like the audacious, dazzling original movie.