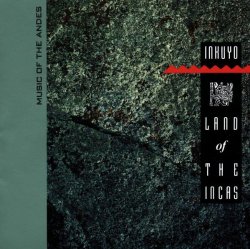 Inkuyo, a group of accomplished musicians, brings the ancient instruments and songs of the majestic Andean highlands and of their Incan heritage, firmly into the 20th century. They take their name and inspiration from a remote mountain village high in the heart of the Andes where the people live as their ancestors have lived for centuries, and where music is an integral part of daily life.Performing on the quena (a resonant cane flute), an assortment of pan-pipes, Andean drums and other percussion instruments, as well as specially constructed versions of the guitar, violin, harp, and tiple (introduced by the Spanish), the members of Inkuyo conjure a heady atmosphere of scintillating melodies and spicy, South American rhythms. The nineteen selections featured cover a vast musical territory inspired by Incan legends and the music of various tribes that pre-dated, or descended from, this great culture. Included on this recording are festive dances from Bolivia, Peru, and Ecuador, pre-Colombian melodies, Andean love songs, and the music of the Callawaya, an isolated society of medicine men and magicians who retain to this day the ancient mystical knowledge and musical forms of the Incas. The recording also provides an example of tradition in transition, offering modern compositions inspired by the Chilean New Song movement, and folk-inspired originals from the members of Inkuyo.

Do you want ot get the Land of the Incas – Music of the Andes?