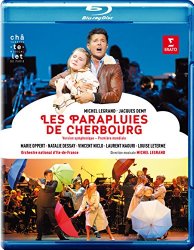 ‘In the conception of a film, I need people to be my allies. With Michel Legrand, the bond is even stronger: he’s not a collaborator but a brother. Nor is he a composer but a fountain of music.’ With those words, Jacques Demy hailed his musical double, friend and partner in creation for thirty years and nine feature films. Their fraternal bond took on its full dimension in 1964 with The Umbrellas of Cherbourg, which, fifty years later, unfolded on the stage of the Théâtre du Châtelet in Paris, reactivated in a semi-staging by Vincent Vittoz.