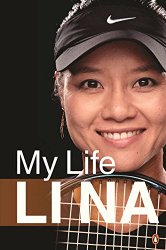 Watch Li Na winning at the Australian Open. Now read her life story. Li Na claimed an unprecedented victory at the 2011 French Open at age 29, and became the first player from an Asian country to win a Grand Slam singles title. Outspoken and likeable, the "late-blooming" Chinese tennis superstar is one of the world's top 10 players, and has championships on grass, clay, and hard courts to her name. Li Na is a tennis player few forget. Beyond the rankings and million-dollar endorsements is a life just as remarkable as her success. Li Na grew up within a rigid national sports system, living away from home and training six days a week, and spent years struggling to believe in herself. Her outstanding feats in a sport she grew to love, recovering from three knee surgeries, and conquering her own demons, are nothing short of inspirational. Told with honesty and humor, Li Na: My Life is the moving story behind an extraordinary sporting icon.